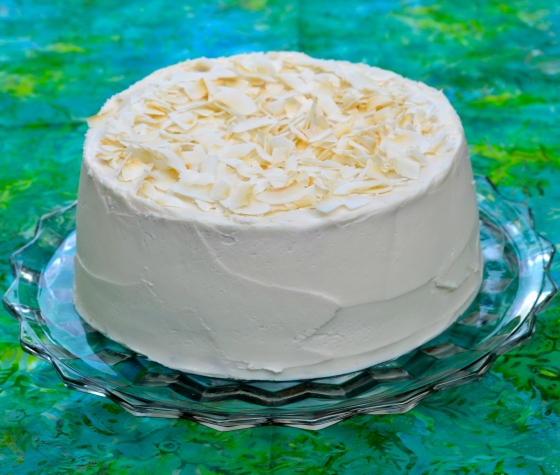 This cake tastes like summer at the beach.
The only thing else you need is a drink with an umbrella in it!

Pour all cake batter ingredients except the coconut into a mixing bowl. Turn electric mixer on low and blend for 30 seconds. Increase mixer speed to medium and beat for an additional 2 minutes. Scrape sides with a rubber spatula, add 1 cup sweetened flaked coconut and mix for another 30 seconds. (Don’t be tempted to add more coconut or the cake will fall in the middle!) Divide batter equally between the three greased, lined and floured 8 inch cake pans.

Bake cake at 350F for 13 to 16 minutes. Cake is done when a toothpick inserted in the middle of the pan comes out clean. Remove pans from oven. Immediately run a knife between the cake and the sides of the pan. Let cake cool 10 minutes then invert one of the layers on a cake plate that has been lined with 4 strips of wax paper under the edges of the cake (for easy cleanup after you have iced the cake). Invert the other two layers on wire racks.

Poke holes in the layers with a toothpick and brush liquid cream of coconut on top of each layer. It will take around 1/4 cup cream of coconut for the three layers. While the cake is cooling make the pineapple filling.

In a small saucepan mix the powdered sugar, cornstarch and salt with a wire whisk. Add the pineapple juice and stir until all the dry ingredients are wet. Cook over medium high heat stirring constantly with a wire whisk until the mixture thickens. This takes about 8 minutes. When the mixture begins to thicken it will look stringy, like it is never going to mix together, but keep stirring and it will eventually become one cohesive mass. Add drained pineapple and cook for a couple more minutes. Remove from heat and set aside to cool to room temperature. While you are waiting make the icing.

With a mixer cream butter and semi-solid cream of coconut together for 3 minutes or until completely combined. Add salt and vanilla. Add powdered sugar alternately with the liquid cream of coconut. Beat until smooth.

To assemble cake: Place one layer on a cake plate with 4 strips of wax paper under the edges of the cake. With a knife place a 1/2 inch dam of icing around the perimeter of the cake in a circle. Spread 1/2 of the pineapple filling inside the icing ring. Place the second cake layer on top of the filling. Make another dam of icing around the perimeter and put the other half of the filling inside the ring of icing. Place the third cake layer on top of the filling. Ice the cake with a thin layer of icing. Place in the refrigerator to harden. (This is your crumb coat and will keep the crumbs out of the icing when you apply the final coat of icing.) After the icing has hardened, ice the cake with the final layer of icing. Garnish: Sprinkle toasted sweetened or unsweetened coconut on top of the cake. Enjoy Friends!

As We Serve With Significance